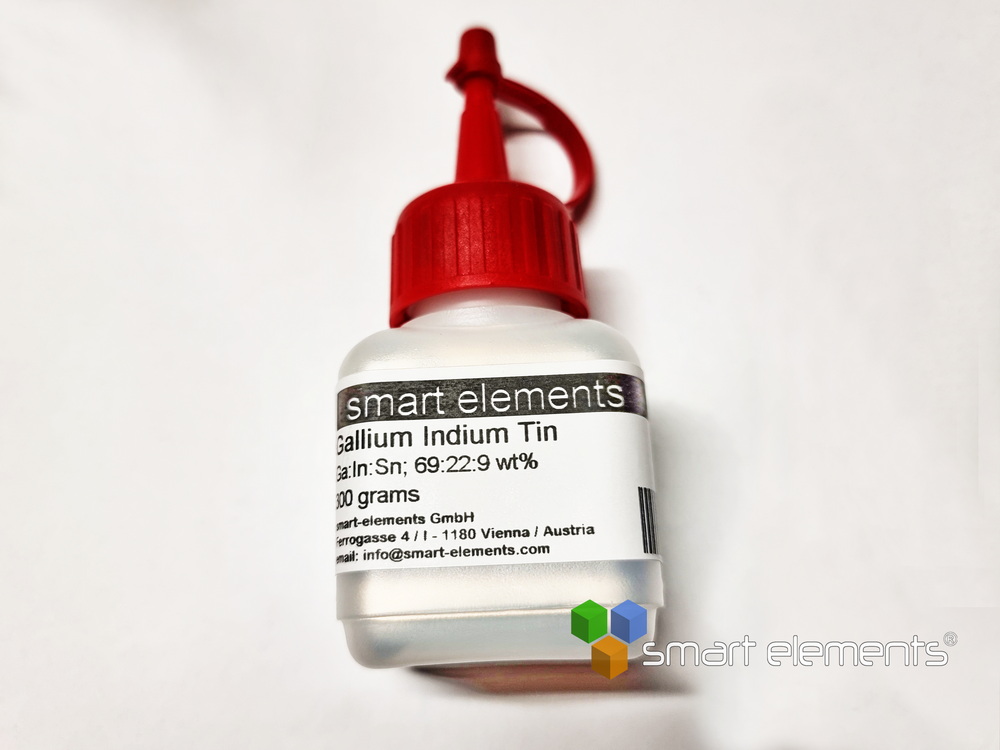 Gallium Indium Tin eutectic, 99.99% – liquid Metal 300 grams
Ga:In:Sn; 69:22:9 wt%
This liquid is a family of eutectic alloys of gallium, indium, and tin which are liquid at room temperature, typically freezing at -19 °C (-2.2 °F). Due to the low toxicity and low reactivity of its component metals, it finds use as a replacement for many applications that previously employed toxic liquid mercury or reactive NaK (sodium-potassium alloy).
It tends to wet and adhere to many materials, including glass, which limits its use compared to mercury. Ga In Sn liquid is commercially used as a mercury replacement in thermometers due to its nontoxic properties, but the inner tube must be coated with gallium oxide to prevent the alloy from wetting the glass surface.
It has higher reflectivity and lower density than mercury; it is investigated as a replacement of mercury in liquid mirror telescopes for astronomy. It is also a promising coolant, though its cost and aggressivity (it corrodes many other metals by dissolving them) are major obstacles for its use. Small amounts have begun to be sold as thermal grease to computer enthusiasts; it has a much better heat conductivity compared to more standard thermal pastes (allowing hot chips such as CPUs and GPUs to run several degrees cooler), but needs to be applied more carefully than the electrically isolating standard greases, since spills can cause short circuits.

You can find out more about which cookies we are using or switch them off in settings.

This website uses cookies so that we can provide you with the best user experience possible. Cookie information is stored in your browser and performs functions such as recognising you when you return to our website and helping our team to understand which sections of the website you find most interesting and useful.

Strictly Necessary Cookie should be enabled at all times so that we can save your preferences for cookie settings.

If you disable this cookie, we will not be able to save your preferences. This means that every time you visit this website you will need to enable or disable cookies again.